We had an awesome Christmas. God is good. Happy birthday Jesus
Posted by d at 9:16 AM No comments:

The History of the Christmas Card

As I was searching for inspirational Christmas stories, I came across the "History of the Christmas Card" which I found quite interesting. I thought others might find this history interesting too. The web page source: www.allthingschristmas.com/xmas-cards.php

THE HISTORY OF THE CHRISTMAS CARD

For more than thirty years, Americans had to import greeting cards from England. In 1875, German immigrant to the U.S. Louis Prang, opened a lithographic shop with $250, and published the first line of U.S. Christmas cards. His initial creations featured birds and flowers, unrelated to the Christmas scene. By 1881, Prang was producing more than 5 million Christmas cards per year. 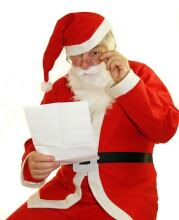 Today, Christmas cards come in all shapes and sizes -- from small and simple to big and colorful. The big American producer of Christmas cards, Hallmark, employs a whole army of Christmas card designers who produce new Christmas cards every season. The most popular cards are the old fashioned and nostalgic ones with sledges and pixies, and a big, chubby Santa Clause in a red and white coat.
Since the Internet became widespread in the middle of the 90’s, sending electronic Christmas cards became the trend.

As I sit here on Sunday morning, December 20th, I am listening to the fabulous voice of Josh Groban. I am absolutely loving his Christmas CD NOEL. What a superb voice, very soothing, spiritual and uplifting. I couldn't make it to church this morning and I am a firm believer things happen for a reason. I am feeling the movement of the Holy Spirit and the true meaning of Christmas - the birth of our Lord Saviour Jesus Christ.

Track 6 "Thankful" brings it home for me. This is a message for every single person living on this planet. Regardless of our individual backgrounds and circumstances there is a place we are all connected, and each of us can find each other's light.

What a powerful statement - and so true!

Somedays we forget
To look around us
Somedays we can't see
The joy that surrounds us
So caught up inside ourselves
We take when we should give.

So for tonight we pray for
What we know can be.
And on this day we hope for
What we still can't see.
It's up to us to be the change
And even though we all can still do more
There's so much to be thankful for.

So for tonight we pray for
What we know can be
And every day we hope for
What we still can't see
It's up to us to be the change
And even though we all can still do more
There's so much to be thankful for.

David Foster discovered Josh Groban - and I am thankful for this discovery. Every single album Josh produces is very moving and uplifting.

At this time, I would like to express my thanks and gratitude to all of my clients, strategic partners, suppliers, family, friends, colleagues and associates. It has been a pleasure doing business with you and spending time with you. I am very thankful to have each of you in my life. I wish you a very Merry Christmas! Enjoy this Holiday Season, and remember:

THERE IS SO MUCH TO BE THANKFUL FOR!
Posted by d at 6:42 AM No comments:

This little tree is one of my favorite Christmas decorations
Posted by d at 12:39 PM No comments:

In support of Salvation Army - we need your suppot.
Posted by d at 12:32 PM No comments:

Yum! Home made chocolate suckers and candy skewers made by our Pathfinder girls and moms.
Posted by d at 12:29 PM No comments: